Alarming new progressive research indicates that if Donald Trump’s presidency lasts eight years, the earth will turn into an inhospitable planetoid unable to sustain human life. The destruction of our planet is expected to reach irreversible levels within six years if Trump’s social and economic policies are not stopped by college students blocking busy intersections.

Colleen Munther, a meteorologist at NOAA, told reporters that the Trump administration has already had a detrimental impact on the planet. “Floods have increased in intensity, and hurricanes are beginning to exhibit racial bias,” she said. “If every college student in the country doesn’t come together to fight this threat through social media, I’m afraid we won’t have much time left.” 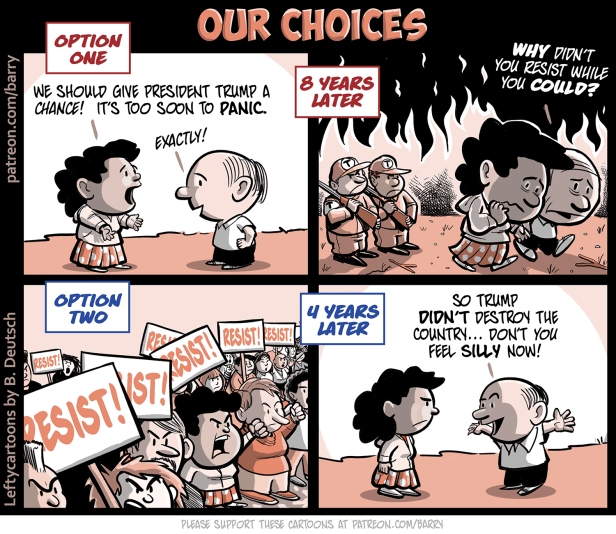 Trump’s election, along with the parallel rise of nationalism in Europe, has lead to extreme acts of opposition and resistance from the left. Fueled by intense fears of discrimination and runaway climate change, many progressives in the US have decided to take action by forcefully shutting down opposing speech on college campuses, blocking public transportation and banning offensive words like “crazy” and “lame.” Many straight women who only date men have also decided to come out as bisexual in heart wrenching Facebook posts.

Celebrities across the world have joined the cause against Trump. J.K. Rowling, who describes herself as the voice of the common woman, says that she long predicted the current paradigm shift in her Harry Potter novels. “I didn’t provide any obvious contextual clues, but I was the first person to include gender non-conforming characters in my works,” she told a reporter. “Voldemort was really just an amalgamation of Pat Robertson, Newt Gingrich and deforestation.”

Some critics have derided the moral panic surrounding the Trump administration as excessive and often divorced from reality. While they admit that he is caustic and politically tactless, many moderates nonetheless says that Trump’s policies are a far cry from fascism, and his social views are perhaps the most liberal of all the Republican candidates in the 2016 presidential election. The echo chamber of like-minded people on social media, some say, has facilitated the propagation of false beliefs and reduced access to dissenting opinions.

Concerns about Trump, however, continue to rise. “The Republicans are using fear tactics to blind the masses,” said Democratic strategist Monica Bailey. “We know it will be a hard decision in 2020, but a few coal mining jobs are not worth the extinction of the human species.”